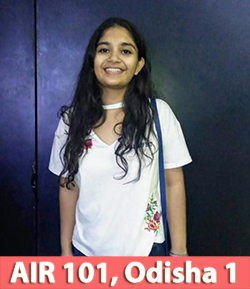 Congratulations on your excellent result in CLAT 2019. How do you feel about being amongst the top-rankers in the state?

Yashaswini: I am enamoured after the results this year, I was in for a big shock and was taken aback initially but I think that’s just part of the big ride.

Tell us something about yourself and your family?

Yashaswini: My father is a businessman and my mother’s a lawyer, I have a younger sibling in 6th grade. I just finished school from Bhubaneswar, but have also had five years at boarding school. My family has been extremely supportive through these two years, ready for almost anything if it means that much.

What prompted you to choose law?

Yashaswini: I’ve always been interested in social studies and felt that I’d like to explore it and other things while at it.

When did you start preparing for the exam? Take us through how you prepared for each subject in CLAT.

Yashaswini: I started preparing after I finished 10th grade.

Since CLAT only has five sections each different from the other but also linked in some way or the other, so preparation for one section usually benefits more than one area. I prepared for different sections in different ways, for English I enjoyed solving vocabulary books and reading for pleasure. Legal was new when I started but soon became a favourite, for it had interesting things to look at from different points of view, which made it fun and also frustrating at times, practicing sets always helped. For Logic, practice was all that was needed, of course it did include sitting down with fat books usually collecting dust for months, but once you start it’s fun, challenging and not so easy to stop. Math, is an area I feared to a certain severe degree, which led me to ignore most of it for a very long time, if I hadn’t gotten the help I got, I wouldn’t be where I am. GK is also a very interesting yet difficult to prepare section, I liked some areas of static gk and hence was prepared for them, or so I think, through these great tests we’d get mostly. All in all I completed a lot in the first year and mostly revised in the second.

How did you balance the board exam preparations with CLAT and other law entrance tests?

Yashaswini: I joined junior college instead of normal school so that I could devote most of my time to CLAT pep, so the pressure for boards was comparatively lesser for me. There was some trouble before and during boards, but I was given the advice and help at the right time and didn’t struggle much.

Apart from CLAT 2019, which other law entrance exams did you take? How was your performance in those exams?

Yashaswini: I took AILET and MH CET besides CLAT, I got a rank of 91 in AILET but didn’t do as well in MH CET which is usually deemed to be easier.

What was your exam day experience? What strategy did you follow in the hall?

Yashaswini: Since this was not the first time I took the exam but still the most important time, so I was a little anxious, but fine mostly. Before getting inside the hall I personally think stretching a little and moving around a little helps calm nerves than sitting and thinking. So, I walked in the hall and decided not to think much what could go wrong

Coming to your incredible CLAT score – what was your initial reaction to it?

Yashaswini: My CLAT score was not a very big surprise, but a surprise nonetheless, I was pretty happy after the scores were released.

How did CLATapult contribute to this?

Yashaswini: CLATapult has helped me learn things I didn’t know I needed to learn. Some of the teachers, their help are the reason I am where I am, I’ve received constant support and help whenever needed. With this rat race going on, here at least we knew some of the inside story. They’ve helped me immensely for which I can’t thank them enough.

What skills and abilities do you consider important to do well in CLAT?

Yashaswini: Consistency and Composure. To do well in an exam as unpredictable as CLAT is consistency in practice and revision is the foremost need to get through. Composure, on the other hand is vastly talked about, but is actually even more important. The exam is not really the biggest hurdle, it’s much easier than you’d think, what changes the game is how one handles it. Taking the exam with a calm mind always helps to do better

Your strength and weaknesses – how did you deal with them?

Yashaswini: I always felt that speed reading was my strength, funny, I understand, but it did help me work on other areas while some people still worked on their reading speeds. Math was just the opposite to me, I’d leave it, ignore it, try to learn and forget and what not. Through the two years, if I say I practiced a lot and got better, I’d be lying, for I put in a lot less effort. But I got some help towards the end which was a great push, which ultimately led to this.

What do you think might have been the ‘special ingredients’ in your strategy that put your score so high up the scale?

Yashaswini: The fact that I didn’t really flinch internally after seeing a new type of question was special in my opinion, for I saved the extra 5 seconds people would spend obsessing over it.

Mock tests – useful or overhyped? Which ones did you take and how did you go about them?

Yashaswini: Mock tests were the most important part of my second year of prep. They helped me gauge difference in performance, progress roughly. I took all the CLATapult mocks and also some test series from other institutes, because we need to take as many as we sanely can.

Any word of advice for new CLAT aspirants?

Yashaswini: CLAT is quite the ride, there are certain bumps and bruises along the way, but you shouldn’t give up. One small loss doesn’t define you or your performance altogether, do not let it affect you and your mental health. There are many out there who’d pull you down and demotivate you to the point you start thinking you’re worthless, but it’s not upto them to decide if you are.

Why should one join CLATapult?

One should join CLATapult to know the difference between what is recommended and what really gets you where you want to be, while supporting you along the way and more often than not making you laugh. One should also join the crash course for clat of clatapult and see how efficiently they teach the students. I want to thank online coaching classes for clat to guide me in the best way.

Swagata Mukhopadhyay was a 1 year (Class-action) student at CLATapult. She secured an All India Rank of 274 in CLAT 2019. Congratulations on your excellent